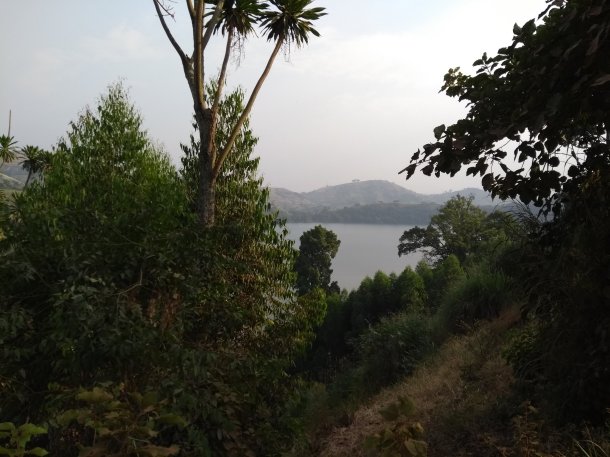 ​For the last weekend, I was invited by a friend to stay over at a campsite close to Fort Portal in western Uganda (not far from the Congolese border). Instead of writing thematically, I will keep this essay in journal format. I start with the departure in Kampala and end with the arrival back at home. The week before, I went to Jinja (a city around 70-80km East to Kampala) to see the source of the Nile but compared Fort Portal, there is a huge difference in favor to the latter destination. One reason why I was looking forward to come to Fort Portal is that I would finally see with my own eyes a region that borders North Kivu in the DRC. Both North and South Kivu are renown for civil conflicts and wars that date back at least to the 1990s when both Hutu and Tutsi fled from Rwanda before and after the genocide. This region was the staging point in 1997 when Ugandan and Rwandan troops toppled the infamous dictator Mobotu in Zaire.

The journey began at Link Bus Station. The Link company is bus operator throughout Uganda and has for local standards decent busses (only busses designated to Rwanda are of better shape apparently). A ticket for the 5-hour ride costs 25.000 UGX (around 6 Euro) and in contrast to Costa busses to Jinja, this time the operator works according to a schedule. Unfortunately, even these busses have no functioning suspension, so keep in mind that while I write these lines my bones still shake after experiencing hundreds of bumpers and potholes on pretty rough roads, in particular those in the vicinity of Fort Portal. The longer we drove, the more resembled the nature my imaginations which I had from documentaries about the civil wars in Eastern DRC. Instead of flat lands, the landscape transformed it a more hilly area with sometimes tea, banana, coffee, or other plantages on slopes. 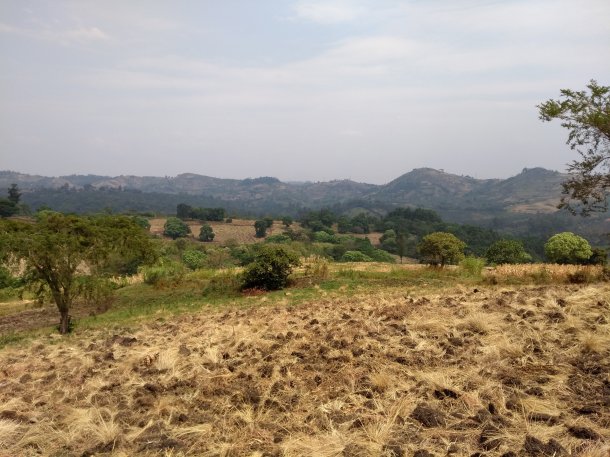 A small highlight occurrs in Mubende, half way to Fort Portal. It is bigger town which many travelers cross and the local economy partially depends on feeding those passing by. Once the bus halts, dozens of vendors with bread, different types of grilled meat (chicken, beef, goat), grasshopper snacks (very tasty!), and beverages approach the bus windows to sell their products. The road to Fort Portal is partially under construction, and whom do you see sometimes? Of course, Chinese workers together with their Ugandan counterparts. But this, I leave for a different blog post. I was lucky to see two monkeys strolling alongside the road, they did not seem to care much about the bus.
Finally arriving in Fort Portal, it took 30 more minutes to get to the campsite. Along the way, I could get my first impressions of the famous crater lakes in this region. They are called crater lakes because they have no in- and outlets. It is forbidden to swim in them due to a nasty bacteria called bilharzia. Although there is good medication to treat bilharzia infections, the proverb “no risk, no fun” does not really apply here (too much risk compared to too little fun). This also applies to the local population which is not immune against it. So, I met a young child (his name was Jordan) in the same evening who strolled around with his friends and he also said that they are not allowed to swim due to “organisms” in the freshwater. He toured us around two of the crater lakes and showed some of the banana plantages. Smart boy, he was finishing the 7th grade of primary school, after which he would get to High School. The tricky part is that High Schools are expensive and not everywhere available, so I hope he will make the step somehow. Many children from less wealthy families depend actually on donors from Western countries. Sums between 50-100 Euro allow them to go to school and speaking to students above 20 here, I often hear that they were supported in this way during their childhood.

Saturday started off with passion juice and banana pancakes to be ready for a 6-hour hike throughout the region with all the crater lakes, forests and plantages. The roads are made by some dusty red soil and whenever a jeep drove through, it took a while until the dust settled. After the whole hiking trip, a shower was badly needed. Along the way, we passed several local communities who lived off from small-scale farming. Whenever some young children saw me, they shouted out loud “Musungu! Musungu!” – which means “White Man” and frequently added “How are you?”. However, you not always get a reply back if you answer “Fine, and you?”, here the language barrier begins. Some children are really excited to see a Musungu, I got even hugged by one young girl who was so happy to see a Musungu walking around. 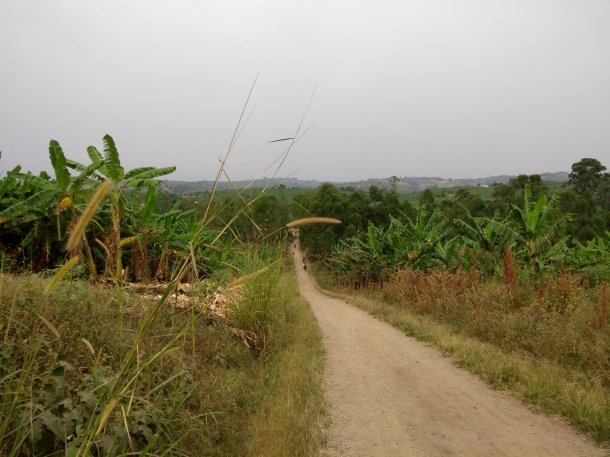 The locals in the rural area are almost entirely invested in small-scale farming or, for young guys, in boda boda riding. Of course, there is gender-division regarding some tasks, but despite that women also frequently work on the farms (not seldom you see only women working on a land plot). What virtually everybody seems to possess is a machete. Every second to third person above the age of 18 carried a machete for their work on the farms. These machetes are infamous as they were used as the main killing tool during the Rwandan genocide in 1994. They are needed to cut banana trees and other fruits. Nevertheless, one can also find sometimes a local art shop with unique little wodden statues, bags, clothes and trinkets/adornments. You can metaphorically spot some little gems there.

Regarding the nature, I do not want to write too much but let pictues speak for themselves. I attach several of them just below the blog post and I chose them to illustrate a variety of different flora. A secret secret tip is a local, remote waterfall in the woods. The water was clean and crystal-clear. As it is moving water, swimming was no problem and with temperatures around 25-30 degrees, it became a welcoming refreshment. Funnily, the local reverent inspected the waterfalls on the same day, so we had a chat about local works to build a small dam for electricity production and the effects it might have on the waterfall. He mentioned that there will be no consequences according to the construction company but after the experience of the big dam at the source of the Nile in Jinja which swallowed some famous falls, I am less optimistic. 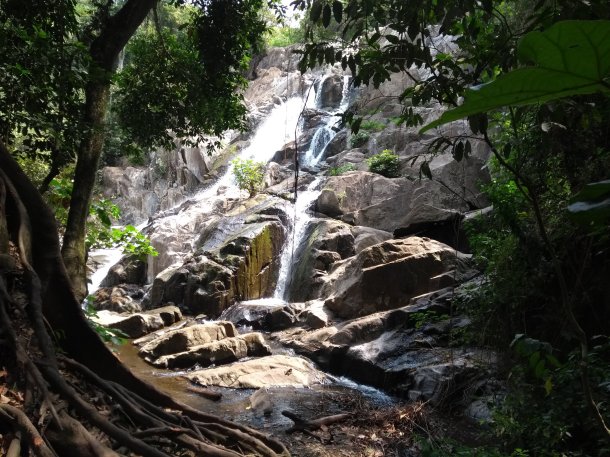 One last highlight occurred Sunday morning. Not far from Fort Portal is Game Park with monkeys but visiting it would expand my budget too much (just the entry permit costs 150$) so I relied on seeing some monkeys in the local forests. Just one hour before departure, we spotted a large family of monkeys excatly close to the campsite and we could watch them jumping around from one tree to the other. After searching the internet, I surmise that I saw Red Tailed monkeys which would fit their population distribution within Uganda. Unfortunately, I was not able to shoot photos or record videos (I left my phone at the breakfast place…). Anyway, it was a successful ending of the trip to Fort Portal. Boda bodas brought us back to Fort Portal and after again 5 hours in a bus without suspension, I finally reached Kampala. 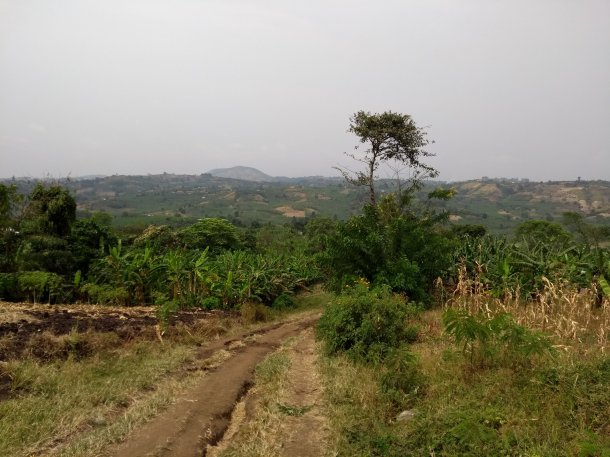 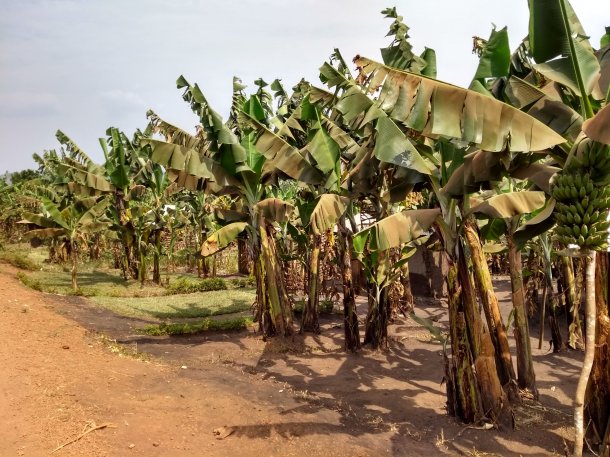 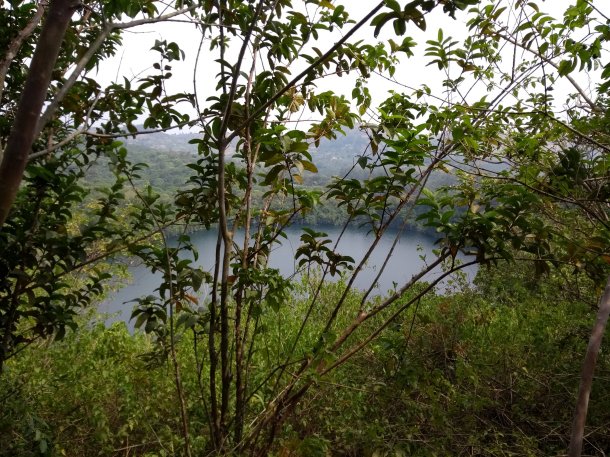 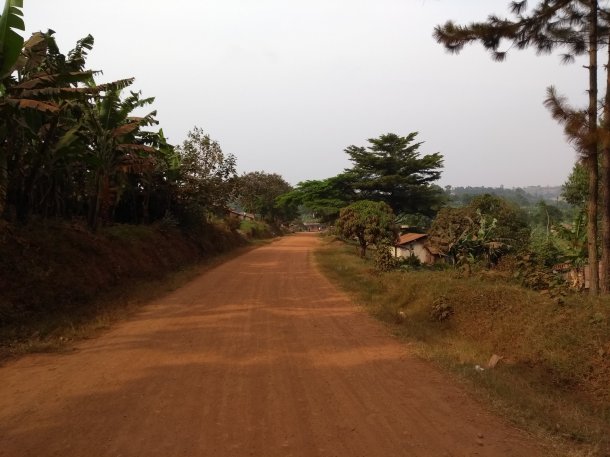 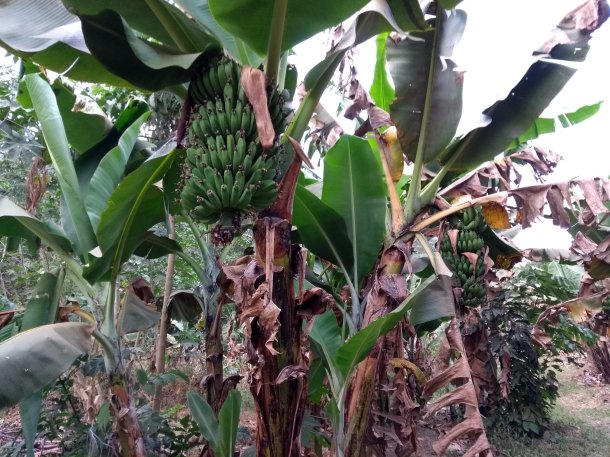 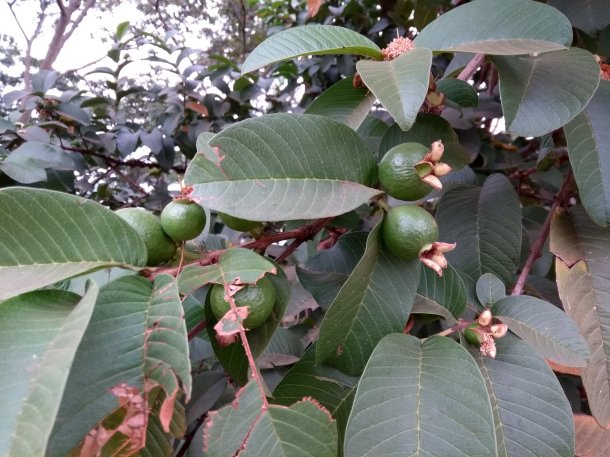 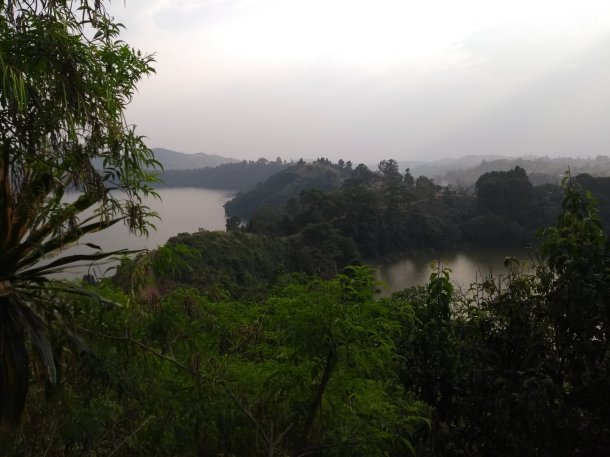 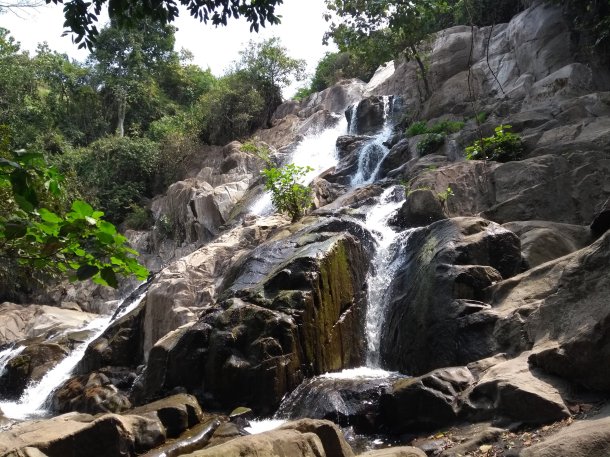 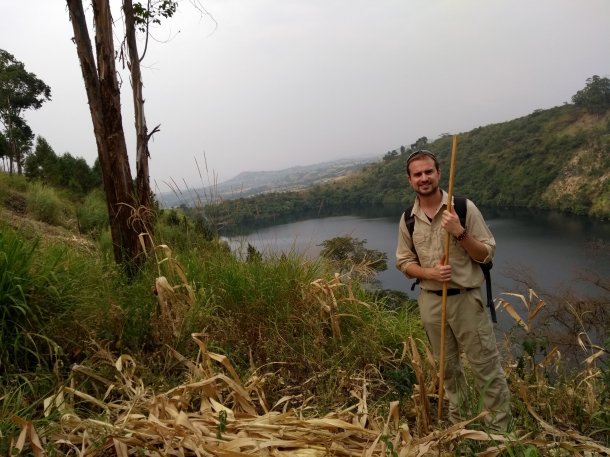 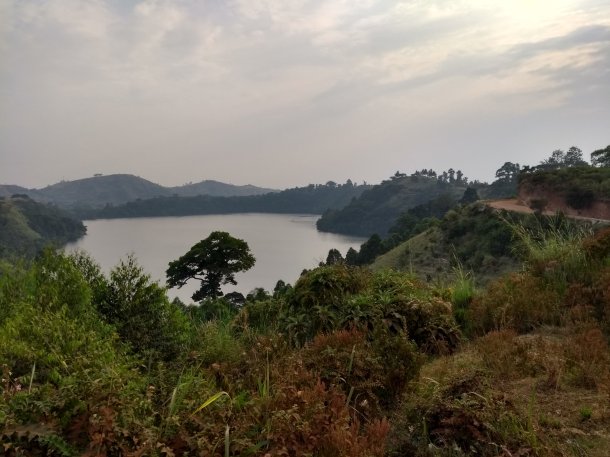 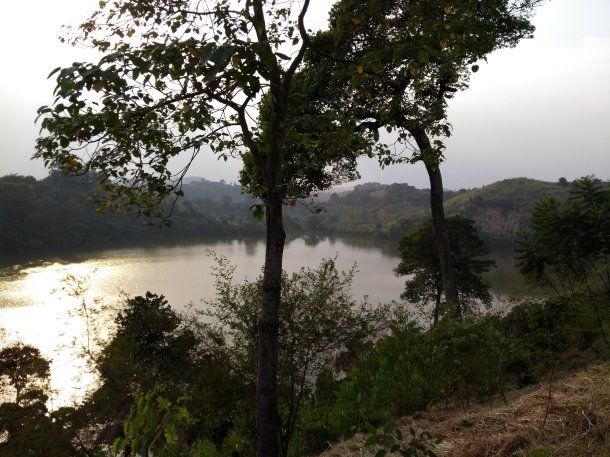 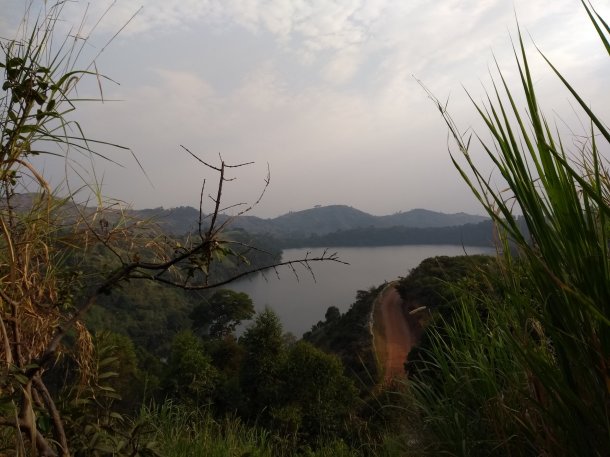